My Chip of the Berlin Wall: A blast from the past

This post is a blast from my distant past. It’s not about Asia, but it’s still something that I’d like to share. A few pics from the days when the Berlin Wall came down.

More than 20 years ago I was crashing with a friend in Heidelberg when the news came over the wire– The Brandenburger Tor (gate) was to be opened on December 22nd, 1989. There was nothing to be decided. I simply had to go. I tuned up my car, a 1972 Volkswagon Bug, and hit the road.

Getting the 1972 Bug ready to drive to Berlin

The Road to Berlin:

Back up a few weeks and you’d find me driving from Amsterdam, through Belgium and Luxemburg picking up a few passengers and a new clutch for my broken car along the way to Heidelberg. 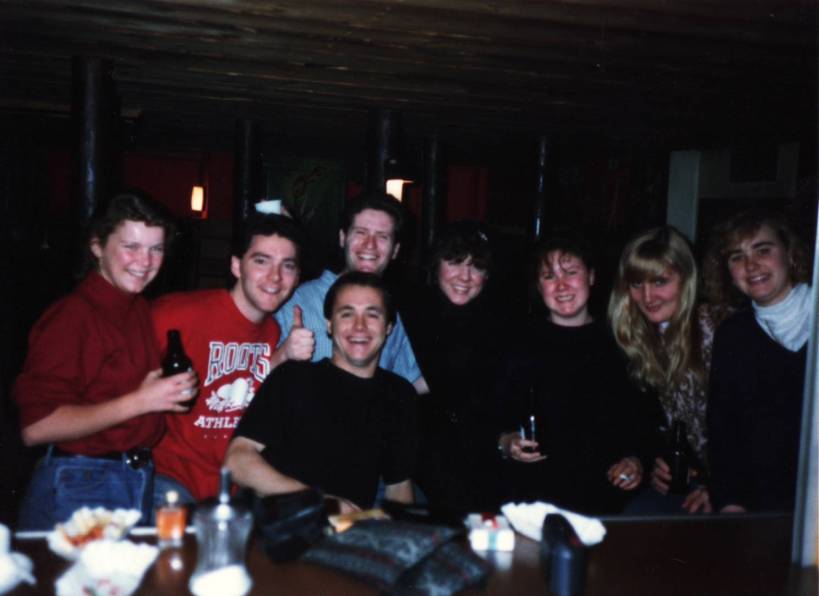 One thing I miss about my travels when I was younger was the way I used to meet so many people. Travel seems to be such a solitary sport these days. Everybody is too busy blogging. Back then, with no Internet, all you had every night was beer, conversation and if you were lucky, a few tunes strummed on a guitar. On the other hand, it was a lot more difficult to travel back then, so I guess we all just gotta roll with the times.

In the photo above, I’m the Canadian guy representin’ with the Roots T-shirt. The guy to my left, Don Rosen, was a very cool guy I ended up making the drive to Berlin with. But not before we got absolutely hammered at the hostel in Frankfurt. That probably  explains why we got lost on the Berlin Transit road — which took you through East Germany to West Berlin. We had the munchies and went in search of food, which yielded a Cafeteria with nothing but a few stale bits of bread and some workers and patrons very nervous about the westerners illegally in East Germany. They urged us to get back to the legal road, which we soon did

We arrived in Berlin very early in the morning, checked into a traveler’s hotel and slept a few hours. We got up and made it in time for the big event. Chancellor Helmut Kohl was meant to give a speech, but nobody was really paying attention.

Still on the West Side of the Wall

As you can see in the pics, it was a mass of humanity. Everybody was happy. These shots are from the West side of the wall. I was helping guys get up there – as you can see, you can’t get up there without a serious leg up. Then one guy patted me on the back and said, “Now you!”

“I’m not German,” I protested.

“Today, we are all German,” he replied. Works for me! I just smiled back at him and up I went. 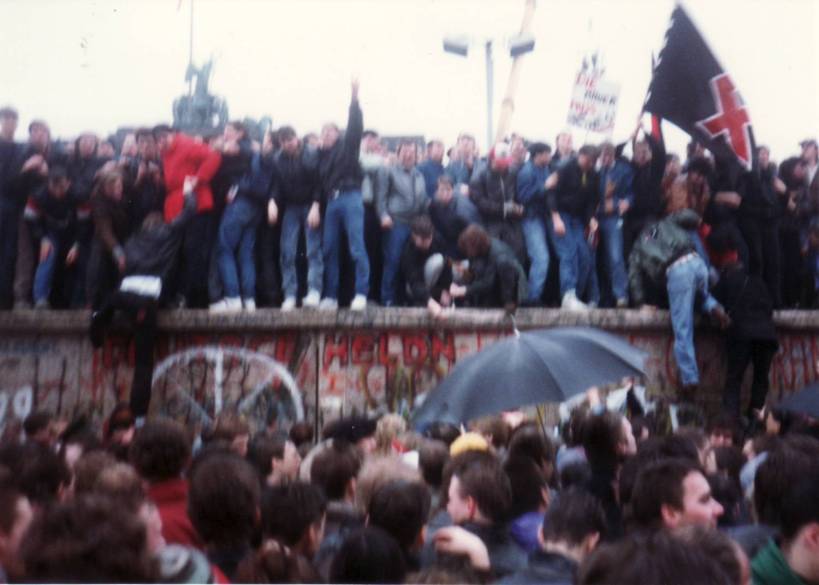 Getting up on the wall

Here’s a view from up on the wall. 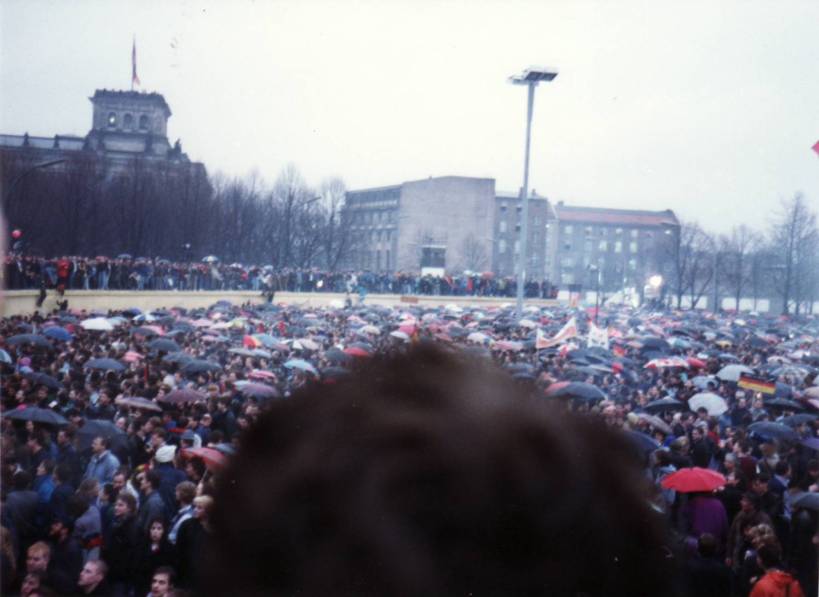 Up on the Berlin Wall

Once up there, Don said, “Let’s jump to the East side!” Me, being the law-abiding Canadian, replied, “But we don’t have a visa.” He ignored me and jumped down. He yelled back up to me, “Seriously, 50 years from now, are you going to regret anything today short of being shot?” Of course not. I jumped.

East of the Wall

The East was cool. The main street was opulent. Everything off the main street was grey and run down.  But there were some beautiful sights. Like the Fernseturm shown below. At the top of the tower was a high-end restaurant that rotates once every hour. We changed some money to Ost-marks on the black market and headed up for dinner.

There were four of us. The menu was amazing, but when I asked for the steak, I was told, “There is no steak. Only pork!” Ok, then, I’ll have the pork with the fried potatoes. “There is no potato…Only toast!” OK, then, I’ll have my pork chop with some toast (which came with some kind of mystery apple sauce. Bonus!) In the end, we all had pork and toast. That’s all they had. Well, that, and alcohol. Lots of alcohol. We drank a truckload of wine as the restaurant slowly revealed an amazing view of the east and west cities.

After eating, we ordered dessert. “No!” she said. We pleaded that we had money and we apologized if we’d been too loud. She just pointed at the exit and the people in front of us. We finally figured it out. It was a socialist mentality. You get your one hour, and when the restaurant gets to the elevator, you have to go so the next group can eat. Mystery solved.

The highlight was the evening when people swarmed, drank, hugged and connected around the Brandenburger Tor. Here are some photos of the Tor.

A shot of the Tor from up on the wall. 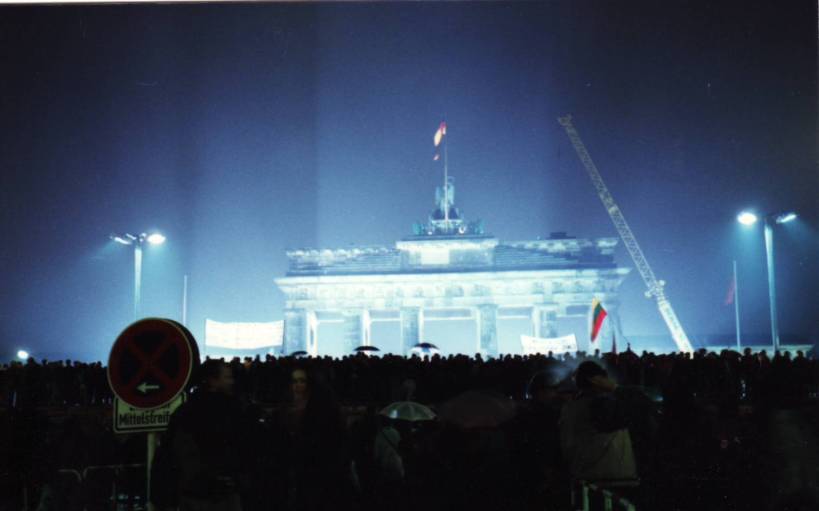 The same Brandenburg Gate you would see in the Scorpions Video.

Life by the Wall

I lived in West Berlin teaching English under the table at the Benedict School on the Kurfurstendam. While East Berlin was monotone, West Berlin was equally extreme in its modernity. I loved it. But it also had some very cool areas in the city such as Kreutzberg, which was the place where the cool counter-culture types liked to hang. I wasn’t one of them, but I tried to fit in.

Of course, at that point in time, chipping away at the wall was a daily activity for many people. It was HARD to get even a small chip of the wall. You really have to work at it.I still have a cookie box full of wall in my office in Japan. Not sure why I keep it. I guess I can give them out as souvenirs some day.

Must have taken 100s of hours to get this much chipped away.

And then there was the “Berlin Door.” While we were there some guys had found an outline of a door beneath the concrete. We waited while they kept at it with sledge hammers…then it opened. I stepped over to the East side, but didn’t go in. After all, the no-man’s land used to be full of landmines, and none of us were prepared so test the efficiency and accuracy of the East German land-mine sweep corps. 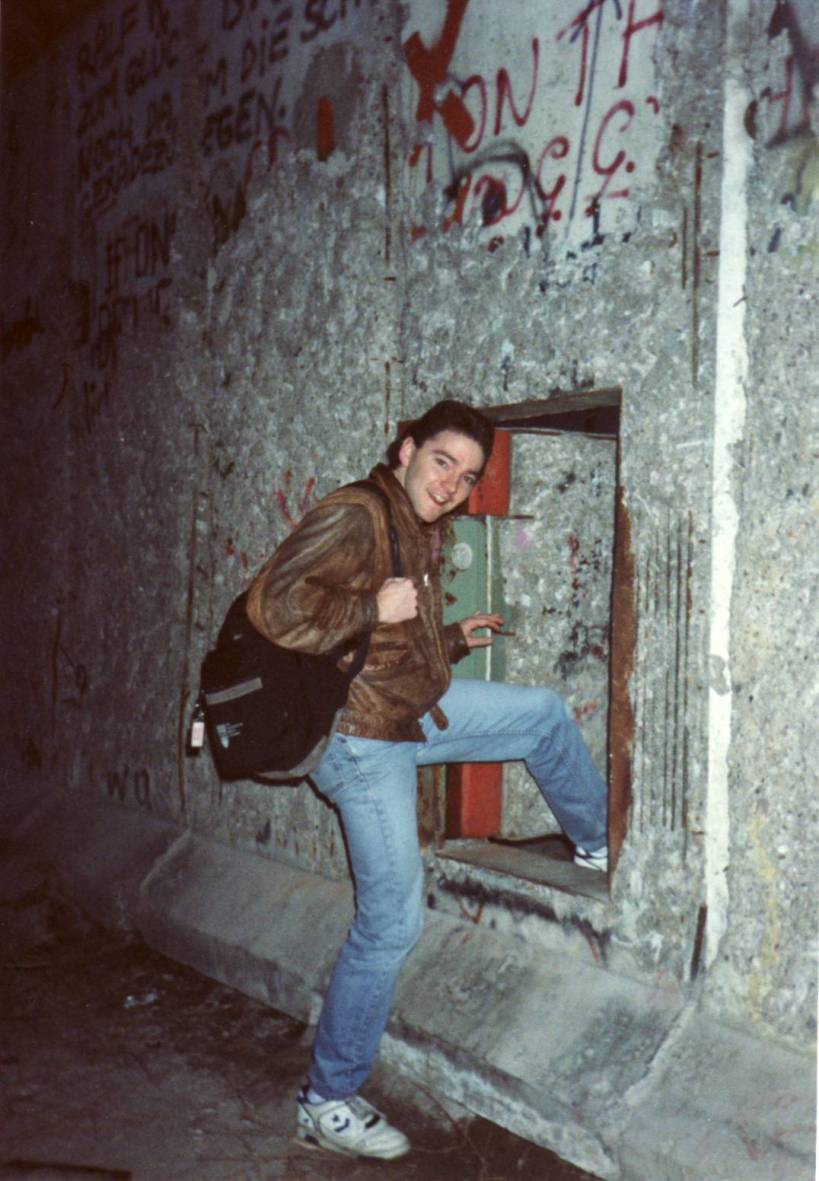 A door that was hidden within the Berlin Wall 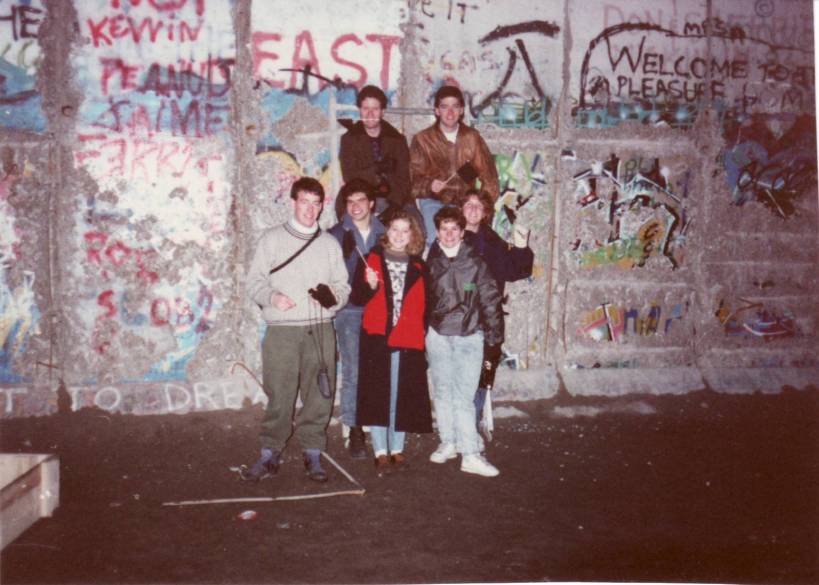 Around New Year with the Hostel crew

The Inglorious Bastard is Forced to Leave

My departure from Berlin was not my choice. I actually wanted to stay. I had applied for a work visa with the help of my employer, who always had me sign my cash pay slips as “Mr. X.” Applying was a mistake. It put the police on to me. The police went to my previous apartment and the owner called me to give me a heads up. Same with owner number two. I moved three times before finally realizing that it was time to bow out gracefully.

My rapid exit from Berlin

I very irresponsibly left my car in a supermarket parking lot, took off the plates, loaded up all the chips of Berlin Wall I had in the cookie jar, threw them in my ruck sack and headed for the train station. Over 4 1/2 months of exciting times shared as a collective memory with millions of people. I’ll never forget it.

One of the coolest pics I have ever taken. Too bad I suck at photography.

← Two Nights in Mui Ne, Vietnam. Worth the visit
It’s More Fun in the Philippines →

6 thoughts on “My Chip of the Berlin Wall: A blast from the past”