I have many fond memories of my 2010 work trip to South India and Kanya Kumari. One of my favorites was showing up to the office entrance every morning to find a freshly drawn colorful design. The Kolam.

The colorful Kolam in front of the Neemtec office

The Kolam:
Some bloggers pride themselves on describing things in novel ways. I, on the other hand, pride myself in my ability to copy and paste from Wikipedia. Here’s what they say about the Kolam:

The Kolam is a form of painting that is drawn using rice powder…using colored powders in Tamil Nadu, Karnataka, Andhra Pradesh, and most parts of Kerala and some parts of Goa, Maharashtra, Indonesia, Malaysia, Thailand and a few other Asian countries. A Kolam is a geometrical line drawing composed of curved loops drawn around a grid pattern of dots. In South India, it is widely practiced by female Hindu family members in front of their homes.

All I knew about the Kolam was that one of the women in the office used to draw one every day from colored rice powder in the morning. This woman, to be exact: 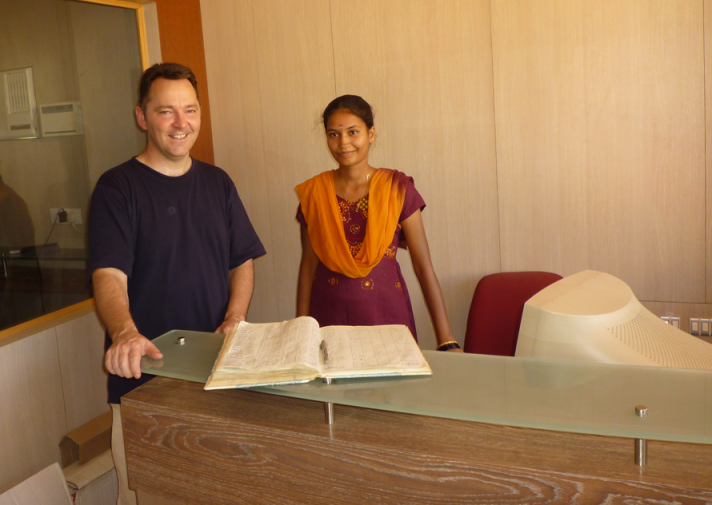 This is Misha, who drew the Kolam every morning. Super shy yet super charming

According to the boss, Leo, the Kolam brings good fortune. It seems that by making it easier for ants and other life forms to eat, it also welcomes other life and fortune in the home and workplace. I don’t know how to draw a Kolam, but I maintain hope that the unwashed dishes in my sink will be equally successful in feeding various critters and bringing good fortune. I’ll keep you posted.

The Kolam were one of my favorite things about the Neemtec office. Although it would take me a day to do something like this, it took Misha a mere 30 minutes. Impressive, indeed. Here are two more shots from Neemtec.

And this one from the Internet, also from Tamil Nadu, the most southerly province in India and the home of Neemtec: 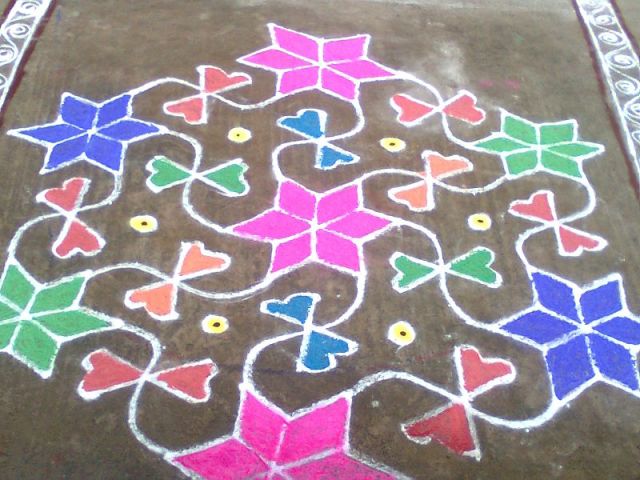 Another example of a Tamil Nadu Kolam from the Internet

← A Day on the Job in South India
Sunset Point and Southern Sights in Kanya Kumari, India →