The Underground River of Puerto Princesa. A hassle to get a ticket and annoying boat guides. But as one of the New 7 Wonders of Nature, it’s worth seeing. Even if you are just passing through on your way to go Island Hopping in El Nido, I’d suggest trying to fit it in. Here are some photos and some things you should know about this amazing natural phenomenon. For a place to stay in PP, check out the Acacia Tree Hotel. (This post has now had 3,000+ views. Thanks for reading and sharing, everybody!)

Getting tickets and a tour

If you are thinking of visiting Puerto Princesa, Palawan, Philippines, it is probably with the intent of doing the now famous Underground River cave tour. Declared a world natural wonder in 2011, the river now sees up to 900 visitors a day in what is a very strictly controlled natural park area. You must apply in advance for admission, and there are no exceptions. No tickee, no entree.

OK, there are some exceptions. In most cases, you have to book a month ahead in high season in order to get one of the coveted park permission passes. In my case, I landed in Puerto Princesa and just went straight to the main government booking agency at the City Coliseum and begged. It worked. Just ask at your hotel where it is and look for the sign in the photo below.

If you are less of a flake than I am and you actually plan the stuff you do, you can find out all the relevant info about booking directly at the official booking office here ==> UPDATE: The official site has been suspended, probably due to not paying website fees or something. So at the moment, the only way to book would be to reach out to a tour agency, preferably one in PP that actually specializes in UR tours. 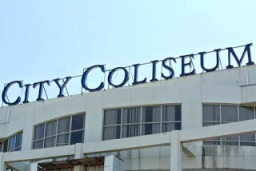 Armed with my permission slip, I went to the travel agency across the street and booked a tour. Basically, they do everything. They pick you up at your hotel, feed you, get you right to the tour start point and bring you home. The cost for a full tour was 1,500 pesos…minus the 250 peso park entry fee I’d obtained on my own.

The long and winding road…

The trip to the Underwater River park is about 2 hours of winding and often bumpy roads. When you get there, you have to hand over your passport or some ID so they can check you into the park. Don’t worry. It’s safe.

Then you’ll have to buy a Palawan baseball cap to be a douchy tourist like me. And, of course, to avoid sunstroke. They give you a free buffet lunch, but you never know how long you’ll have to wait as it’s first-come first-serve…and there was a parking lot full of vans ahead of us. Still, we were on our way within an hour. It’s a 15 minute ride to the drop-off beach where the tour begins. 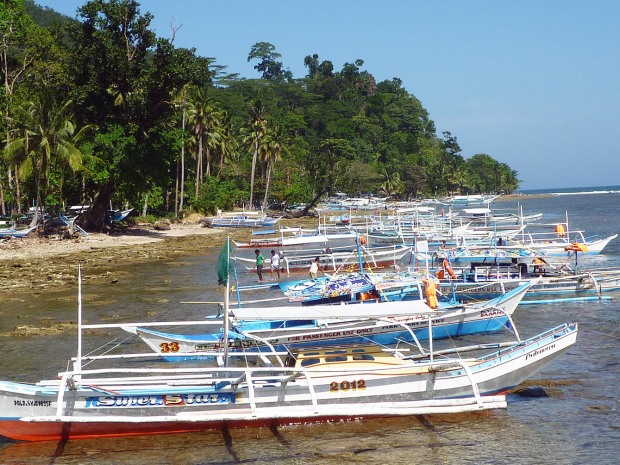 The port at Sabang on the mainland. These are the ferry boats.

The “Sleeping Giant.” The river flows under him, with the highest point in the cave under his nose. 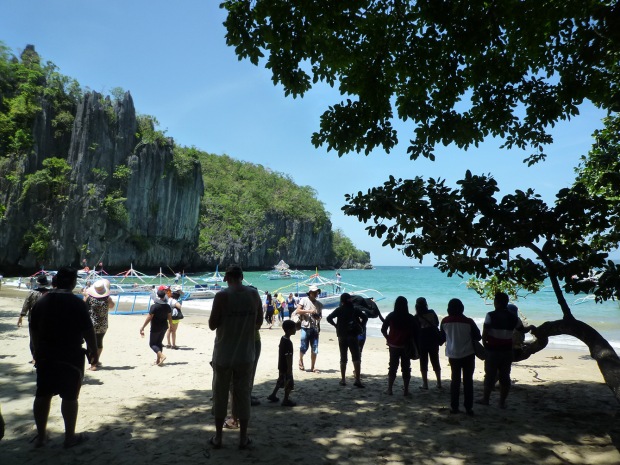 This is where the boat drops you off. It’s a 3 or 4 minute walk to the entrance of the caves.

The group from the van from Puerto Princesa to Sabang. All super nice Pinoys

Ok. Everybody got their fluorescent orange hard hat and life vest on? All the fat foreigners been told repeatedly that they have to sit on their own because they’re fatties and the boats are built to Filipino size? OK, climb on board and prepare to be amazed.

All fat foreigners sit on your own! Ok, I’m guilty as charged there. 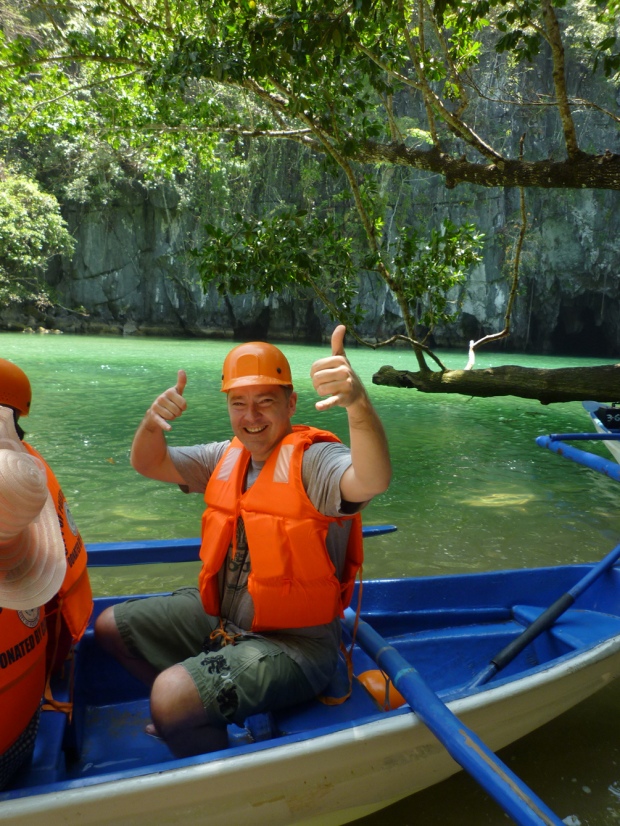 Don’t sit in the back! The guide is annoying and there are too many heads in the way. Sit in the front so you can control the light.

And they were never seen or heard from again…

Oh, and one thing. If you’re at the front of the boat, you will be in charge of the spot light. The boat paddler guy will tell you where to point from time to time. But in the interim, please don’t be like the guy in our boat who was moving the light around so much even the 40,000 bats hanging above us in the caves were getting dizzy. My eyes were darting around so much I thought I was going to spaz into an epileptic seizure. Next time I do the tour, I’m definitely holding the light.

Here’s a bit of video of the trip and caves.

The caves themselves are amazing. At one point, the roof is 65 meters above your noggin. Unfortunately, I have no pics beyond what is in the video. It’s really dark in there. Check out Benson Kua’s blog for some interior shots of the cave. Here’s one from Benson Kua’s Blog.

The only downside of the tour…and it’s a big one, were the boat guides. They never shut up. They all have this script that includes one “pigure” (many Filipinos have a problem with the “f” sound) that can been seen in the limestone after another. Somewhat pucking annoying!

What everybody wanted was for the guide to keep quiet for a minute and just let us soak in this amazing natural wonder in silence. And no, it wasn’t just the foreigners complaining. We were the only ones to tell our van guides, but the Filipinos in our group were talking about it as well. They just didn’t want to make it official. I guess the Pinoys are a bit like the Japanese like that. Suffering in silence.

So…if anybody from the tourism section of Puerto Princesa reads this, PLEASE tell the guides to cut back on the useless chat and give people a few moments of silence to concentrate on the experience. A bit more silence will make the experience sooooo much better. Too much talk is never a good thing. And I talk way too much, so I know what I’m talking about.

But at the end of the day…

The tour is AWESOME!

The Underground River is something worth seeing. They take you in about a half-kilometer into the caves. It’s mysterious. It’s awe-inspiring. It’s dripping water on your head, and, yes, true to their jokes, it’s dripping bat shit on your head from time to time as well. The water is clear and pristine and cool to the touch. The boat seems to move forward more easily than you’d expect from the guide paddling slowly behind you. And it’s over much sooner than you’d like it to be.

But it doesn’t have to be. If you want to dig deep, you can do a combination tour of a boat trip plus walking through the caves for a total of about 8km. I aspire to do this some day. But I plan to insist on a guide who is a deaf-mute.

Two things to watch out for on the walk between the drop off and the tour lagoon: monkeys and monitor lizards. What’s a monitor lizard? Think Jurassic Park, but smaller. 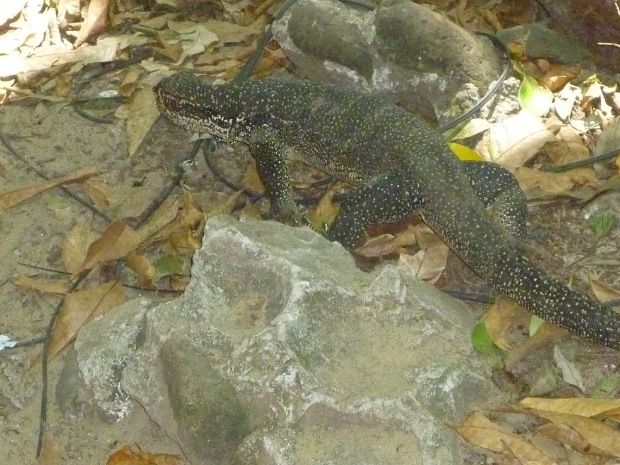 A monitor lizard who just wants to be left in peace. I can dig that.

Anybody else been there and have some more info on this? Please leave a comment.