This post is an overview of one of my new favorite places in the world, Boracay. Even with the gaggles of package tourists who basically are an eyesore and earsore to the individual traveler, this place is special. I mean, just check out the sunset you can see every night (Click to enlarge).

Once you get to Boracay, you’ll have no problem finding cool things to do such as snorkeling, boat trips and scuba diving. But if you’re like a lot of people, trying to get comprehensive intel on the main areas of Boracay — the “Boat Stations” in particular, can be a challenge. Read on to learn more!

What Is Boracay and Where Is It?
Boracay is a small island located about 40 minutes by air from Manila. Basically, you head directly south and pass over the large island of Mindoro, veer left and land on Panay Island. Boracay is one of the main tourist destinations for domestic travelers in the Philippines and international tourists alike. With its gorgeous white sand beaches, the pristine waters and gorgeous sunsets, it’s easy to understand why.

There are two airports that service Boracay Island. The more expensive one is the tiniest airports I’ve ever seen, Caticlan Airport. It’s known as the Gateway to Boracay because it’s about a 10 minute trike ride (a trike is a motorcycle with a sidecar attached) to the boat pier, and a 15 minute crossing by ferry.

The other airport is Kalibo airport, which is a 65Km / 90-minute drive by van to the Caticlan pier. Be warned, the drivers do double the speed limit in unsafe vans.

**WARNING!!**
If you are flying to Caticlan with Cebu Pacific, make sure you fly in the morning. It is now prohibited to land in Caticlan in the dark, and Cebu Pacific, which is known for delays, reroutes to Kalibo on an almost daily basis…with no refunds for your inconvenience and no option but to run the gauntlet on one of the van services from Kalibo.

And yes, I’m speaking from experience. Not only was my flight 2 1/2 hours delayed, causing us to reroute to Kalibo, our van from Kalibo literally caught on fire half way to the ferry pier due to an electrical short. We all jumped out…and almost on cue like a scene from a poorly written movie, it started to rain. Torrentially. We ran for cover in a small sari-sari store. The Filipinos were all laughing. I was just wanting to get to Boracay, and laughing a bit. The Belgian guy beside me was freaking out. A neat lesson in national characters. Anyway, make sure you get to Caticlan if that’s what you’ve paid for — take an early flight!

Before moving on, just so you can see what I’m on about…here’s my video debut. Wooohooo! Check out that sunset!

Boracay Beaches at a Glance
Boracay is a long island that is somewhat dumbbell shaped. The west side of the island, where most of the hotels are, is known as White Beach. Just across the island from White Beach is the less popular and somewhat more rugged Bulabog Beach. Since most people spend the majority of their time on White Beach, let’s look there. You might want to open this interactive map when reading, or you can use the basic map below. Note that the island runs pretty much north to south, so you need to rotate this map clockwise about 80 degrees if you’re thinking in terms of the real island orientation.

If you’re looking to stay on Boracay, you’ll soon read about “Boat Station” 1, 2 and 3. These are used to identify the main areas on White Beach. And no, there are no actual boat stations. In fact, there is no clear line of which area is which, but when you get there you’ll feel the difference. I won’t bother going into details of bar or hotel names as you can figure that all out with one walk up the beach. But for the main look-and-feel, here’s my take on the 3 areas.

Boat Station 1:
This area starts at the northmost end of White Beach (the area farthest from where you get off the ferry from Caticlan) and runs along a beach with no walking path for about 10 minutes. You’ll then hit the walking path that fronts the shops and hotels. The first part of this path is also considered Station 1.

The hotels at the north end of Station 1 are the upscale hotels. The sand is a bit coarser, but it is very picturesque. If you have seen holiday pics of people standing in front of an island just off the beach, that’s Station 1. Most people venture up there and maybe do a bit of swimming or have a drink by the beach, but at night, everybody, including all the hotel guests, head south to where the action is at Station 2. And yes, it’s an easy and very nice walk to do, so hitting Station 2 daily is totally doable.

In fact, there are two popular beach-front nightclubs up near the hotels on Station 1. I went to both most nights for a few beers as the DJs are pretty kick-ass, especially at Paraw. Just know that most of the young, single girls you’ll see clinging off the western guys are working girls. Just sayin’

Boat Station 2:
Boat Station 2 is in the middle area of White Beach, the heart of which is a large walking-mall that extends from the beach back to the Island Highway. “D-Mall,” as it is known, has shops and pharmacies to get groceries, sundries, meds or souvenirs, and in the area closer to the beach, it’s awash in restaurants of all kinds.

The promise of crappy souvenirs of course attracts the package tourists in droves, so you get HUGE groups of Korean and Chinese package tourists shopping or blocking your view of the sunset as they ignore the best view of their life making peace signs and giggling taking thousands of photos that they could take anywhere else in the world. (Yes, package tourists annoy me….is it that obvious?). But each to his or her own — so if you want to avoid this, just walk 10 minutes in either direction of D-mall and you can get a tad more isolation. 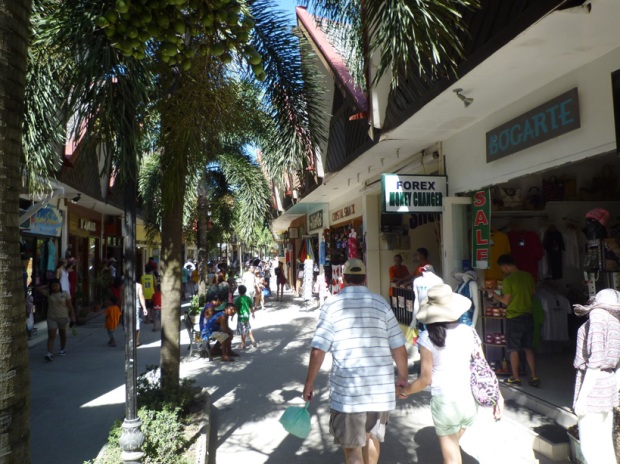 There’s no shortage of places to buy stuff on Boracay. It’s developed up the hoohaa.

What Station 2 is very good for is restaurants and live music right on the beach. It’s a very chilled atmosphere and you can find places that have some form of live music up to and sometimes beyond 1am. There are also some cool places that play trance or ambient chill music so you can get your trip on with your feet in the sand.

Boat Station 3:
This southernmost part of the beach has a reputation for being the low-cost area of the beach, but I don’t think that’s entirely accurate. It’s definitely quieter, and since it has the reputation for being the “traveler” part of the beach, you’ll meet a younger and more individualist type of traveler here than you will in the other areas. But there are also some pretty nice hotels up that way so you don’t have to rough it if you don’t want to.

I can’t say much about Station 3 as I didn’t go all the way up to the end. But I plan to make that my base on my next trip. Hope this little blurb helps you plan your trip, and thanks for reading!

Warning: Watching this romantic sunset alone can lead to poor decision making later on in the evening.

9 thoughts on “The White Sands of Boracay Island, Philippines”