A quick guide to Manhattan: 3 amazing days in New York

Most of my posts are about travel or life in Asia. But a while back I had the good fortune to visit New York. I was there only for 2 days, and it was mostly work. But that was all it took for me to label this as one of the best cities in the world.

In all honesty, I had never felt a strong urge to visit New York. I always felt it was dangerous; that I would get shot or mugged. Boy, was I ever mistaken.

New York is the most visually appealing, dynamic and culturally diverse city I’ve ever visited. The entire city has a single look and feel. I felt like I was in an old gangster movie every corner I turned, all enhanced by that New York accent that people have. And it’s a vertical city. There’s just so much detail in the buildings, you don’t want to miss anything, from the ground right up to the rooftops. And finally, the people. I felt safe, even when walking from W14th up to Madison Square Garden at midnight. I felt welcome, as everybody I encountered was open and friendly with a quick smile. Even the crazy people were quite nice! New York, I’ll be back for sure!

Click photos to enlarge. A cool building across from The Shake Shack on E23rd.

And here’s the view from a friend’s kitchen window. Some people have it rough! That’s the Empire State Building in the background.

And now 2 maps of the major areas, with some photos of a few of the many things worth seeing. First, the major areas. You definitely want to see Central Park, Times Square and Greenwich Village. Click the maps to see details.

And now a few pics. Again, click if you want to enlarge. Of course, I did the usual, and saw the Statue of Liberty and Wall Street. My friends told me not to bother going to the Statue as the lineups are huge. Just go down to the south of Manhattan to Battery Park to see it from a distance. You can also walk to Wall Street from there. And don’t forget to take the subway to experience it. It’s like being rocketed…back to the 1920’s. Not the most modern underground on earth.

And some other cool things to do if you have limited time.

1. Watch the sunset from the rooftop bar of the Ganesvoort Hotel on 9th Avenue in the Village. It’s hugely overpriced, and the waitresses have the annoying habit of treating you like shit unless you order from them directly — but it’s ultra cool and amazing at sunset.

2. Do the long walk up through Central Park, and back down through Times Square. Do it around dusk to see the city lights from Central Park. Amazing.

New York is ultra cool, ultra hip, friendly, safe and a place that everybody should experience. So start planning today. I stayed at The Jane at the north end of Greenwich Village. Pretty cheap for New York, but a great room with excellent service and a hip location. I’d highly recommend it. 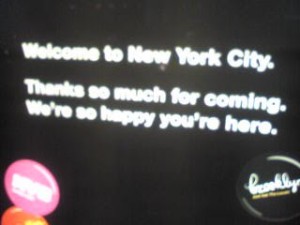 ← X Japan: A blast from the past with Hide, Yoshiki and Toshi
Beers, Guns, Bars and More Beers in Manila →